Though still about 5,000 fans a game off the peak attendance average of 1977 (more in a later infographic), CFL average attendance increased slightly in 2011, reaching an average of 80% of available capacity (albeit with a reduced capacity with a refurbished BC Place Stadium not coming online until September).

On the home side, Edmonton led all clubs in average attendance while Winnipeg’s average exceeded capacity. On the visitor side, Edmonton also led in attendance average with Montreal close behind. Hamilton and Winnipeg brought up the rear in visitor average, dragged down by two games each in Toronto.

All attendance data was retrieved from CFL.ca’s 2011 Schedule and Results page and calculations performed by myself. 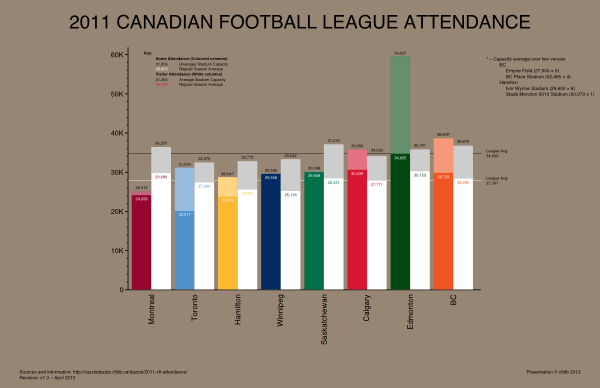