Visualizing the development of football in Canada can be difficult. The multitude of teams and unions, the mergers, the name changes and all the dates are more than one brain can hold. To build out stats.cfldb.ca this became a problem at our HQ as well. I developed this infographic to help keep track of all the teams and changes.

It is in no way 100% verified. I invite the community to review and report any errors they see.

Areas that are accurate in my view are the IRFU, WIFU, CFC and CFL teams and years. I tried to find double verification of all other teams and dates, however for some this was not possible. Still needing verification are the ORFU, QRFU and the Second World War Service clubs and their leagues, along with the MRL, ARFU and SRFU sections, which may need dates corrected, teams added and other changes. We are not sure about the BC team history in the VRU (also known as the Vancouver “Big Four” Canadian Football League) and BCRU as we had a hard time distinguishing between English Rugby that was popular in British Columbia (and still is) and the Canadian Rugby variant that was played in the rest of the country, but we feel we selected the right leagues and their teams transitioning from Old Country Rugby to our Canadian Football, though the information there is sketchy. We would appreciate any guidance and information any expert can offer in this area.

The basis of the infographic is the teams that played senior football that developed into they game played today or competed (by competed, I mean their league or union was eligible to challenge for the Cup) for the Grey Cup (Collegiate teams). I may expand this scope further in the future, perhaps breaking it into separate infographics that can be joined together.

I appreciate all constructive comments and corrections. Please let me know what you think. 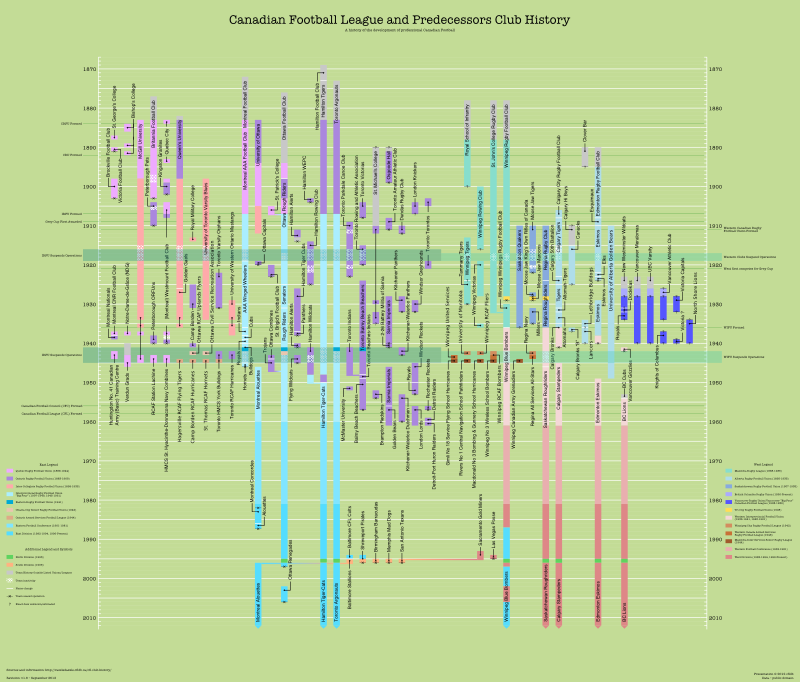