Winnipeg has a new stadium slated to open in 2012, Hamilton is rebuilding Ivor Wynne Stadium in 2013 and Ottawa is also expected to return to the field in 2014 at a newly reconstructed Frank Clair Stadium. Hamilton’s stadium project raised the issue of field re-alignment for the new structure, to be a more traditional North-South orientation. So just how are all the fields aligned at CFL stadiums?

This infographic shows the alignment of the eight CFL fields (including Winnipeg’s new Investors Group Field) plus two additional stadiums, Olympic Stadium in Montreal and the aforementioned Frank Clair Stadium.

All orientation data was retrieved from satellite views on Google Maps. 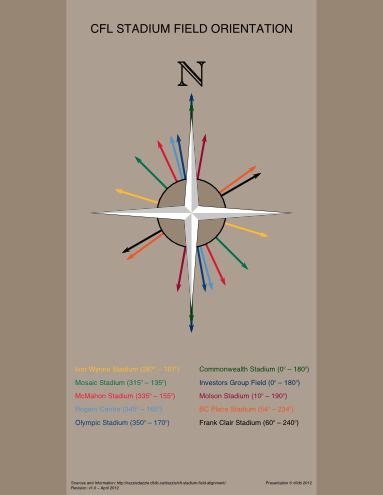