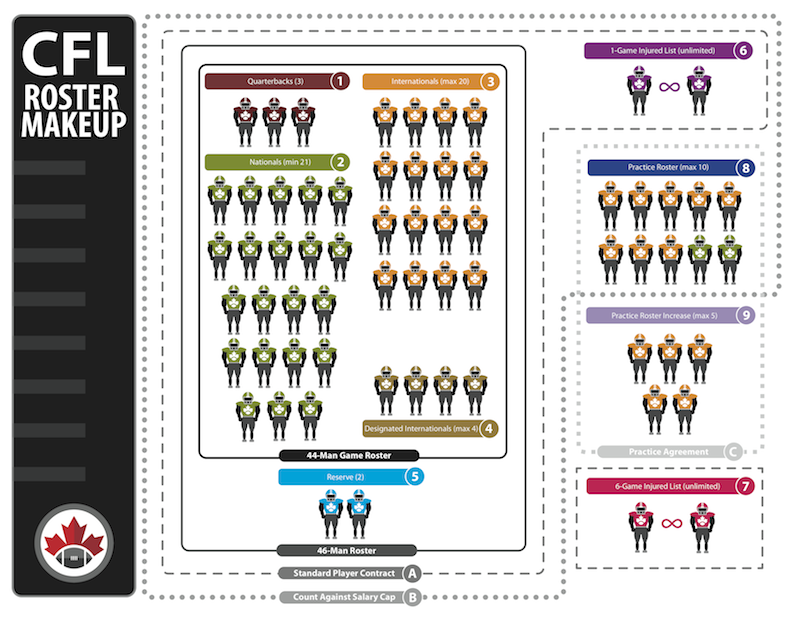 Update 2019: This infographic is now outdated with the ratification of the 2019 CBA and should not be used to understand roster restrictions except for historical purposes. Referencing or citing this document for current restrictions indicates a lack of understanding of the current state of roster rules.

2014 CBA Update: Updated to the 2014 CBA terminology and changes (Source). Please report any errors I have made. Thanks to anonymous graphics designer for updating the document.

Version 2 Update: The latest version presents a much prettier and understandable graphic format thanks to CFLdb‘s graphic designer. It also incorporates changes in the practice rosters introduced last year.

Player rosters of the CFL have a few more rules and restrictions than other sports and therefore require some explanation. There are size restrictions, international and national requirements, and terms like 44-man roster, 46-man roster, injury lists and practice roster that need definition.

Based on my understanding and research, I present the following summary document explaining the ins and outs of the CFL roster. If there are any errors or misinterpretations, please let me know.

This covers the roster rules in force from the roster cut down season before the start of the regular season until the Grey Cup. The rules for off-season and training camp are different and require another document.