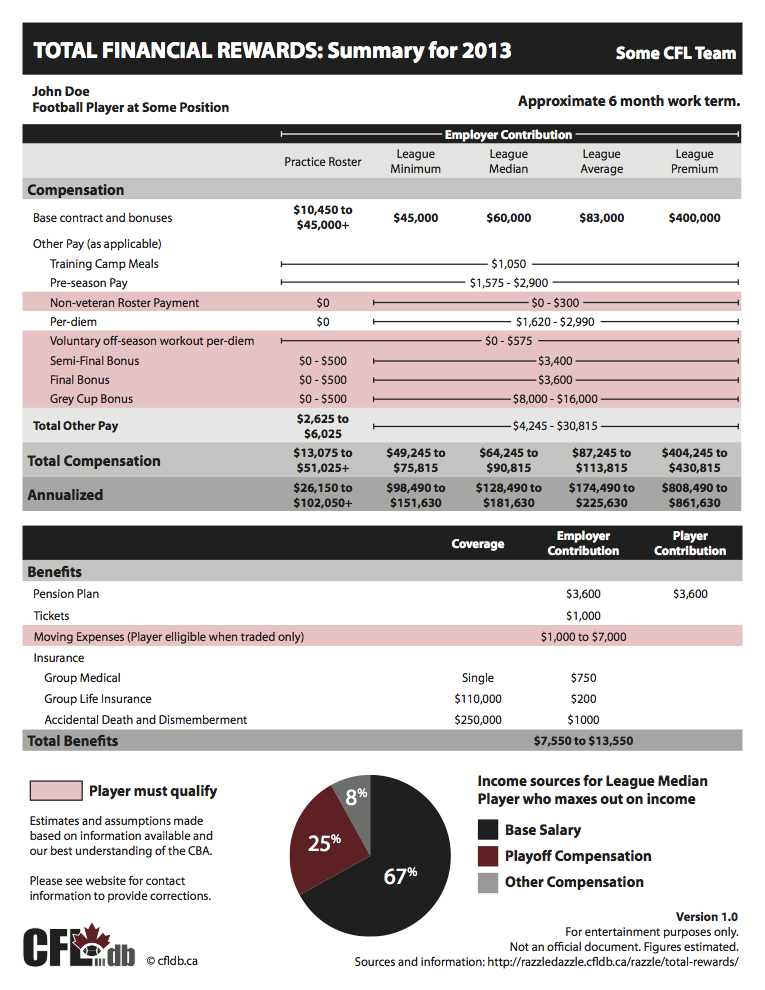 Update: This fictional estimate from 2013 is outdated and now serves only as a curious artifact from the past. It should not be used for present day comparisons as new CBAs and changing economic conditions have invalidated most of the information within.

Large corporations often present an annual statement to each employee, showing the total benefits and compensation they receive in a Total Financial Rewards statement. This presents in real numbers the total compensation an employee received in the previous year including base salary, bonuses, overtime, employer pension contributions, employer paid premiums to benefit plans and other gifts, rewards and subsidies (parking, gym membership, etc.). The purpose of such a statement is to make the employee aware of the cost of their full compensation package and hopefully help with employee retention and satisfaction.

Primary source for information in this document is the CBA. Further explanation can be found on each section below. As much as I attempted to be as accurate as possible, information should not be relied on and is presented for entertainment purposes only. Estimates, assumptions and guesses have been made in compiling this document.

Base contract and bonuses

Based on reports of a league average of $60,000 during the 2010 CBA negotiations. I felt this best represented the median, or mid-point of salaries in the CFL.

Based on the 2013 salary cap of $4.4 million divided by 53 players (42 active roster, 4 reserve list, 7 practice roster). It does not take into account injuries, etc. The purpose of these salary classes was not for accuracy in the average, median, and premium values, but to compare the total compensation at these salary levels.

Based on media reports what elite quarterbacks in the league earn in their prime. This is not a ceiling, as shown by the recent reports of a contract averaging $450,000 over two years.

Based on $25/meal x 3 meals per day x 14 days. Amount of actual savings per player by having meals provided will vary. The CBA (Article 6.01.9) requires reasonable meals be provided for all players during the training camp period. Teams must provide accommodation to out of town players during training camp. Estimates for accommodation are not included in this total rewards statement.

Based on the CBA (Article 6.01.08) requirement of a $300 payment to any non-veteran on the roster 48 hours after the end of training camp.

Based on the CBA Travel Allowance (Article 25) of $115/day of travel with reductions for team provided meals and half days of travel. Maximum based on $115 x 26 days of travel over 10 games.

Based on $115/day per-diem for 3 day workout plus 2 travel days. Teams must provide all meals, accommodation and travel expense for players attending off-season workouts and these values are not included in this total rewards statement.

Players occupying a roster spot for a division semi-final game (or first round bye for finishing first in their division) receive $3,400 per the CBA (Article 12).

Players occupying a roster spot for a division final game receive $3,600 per the CBA (Article 12).

Basing the base contract and other pay received on an approximate six month term, the annualized salary extrapolates those earnings to a 12 month term.

Teams must provide two tickets to each player for each home game as per Article 34.02 of the CBA. The value of these tickets is calculated as $50 x 10 games x 2 = $1,000. Players are entitled to additional tickets at no more than 50% of the sales cost. Value of additional tickets is not included in this section.

Based on the CBA (Article 27) requirement providing moving expenses ranging from $1,000 to $7,000 for players whose contracts are assigned to another team (traded). The range varies dependent on the time of the transfer, number of games on roster and distance between moving locations. Not included in this amount is the value of economy return air fare for the player’s wife, which is available in some situations.

Insurance premiums are simple estimates of the premium cost for Group Medical, Group Life and Accidental Death and Dismemberment insurance paid by the Member Clubs for each player. The coverage amounts are defined in Article 16 of the CBA.

What is not included

If you question any parts of this document and have sources to back your changes, please contact us so we may make adjustments to this document.

Thanks to our graphics designer who created the beautifully designed document presented here.